“Developmental co-ordination disorder (DCD), also known as dyspraxia, is a condition affecting physical co-ordination that causes a child to perform less well than expected in daily activities for his or her age, and appear to move clumsily.”

Sometimes the terms we use as therapists are disputed in EHCP meetings or tribunals. The following quotes have proved useful in defending my own use of the terms in reports, especially when I link the term I use to the specific assessment tool I have used to do my assessment and clinical formulation.

Gibbs and colleagues 2007 described that “the definition of DCD is very similar to dyspraxia. A survey of health and educational professionals showed widespread uncertainty about the definitions of, and distinction between, DCD and dyspraxia. Furthermore, the rationale for using one or the other term in the literature has been unclear. Therefore, DCD and dyspraxia should be regarded as synonymous.” 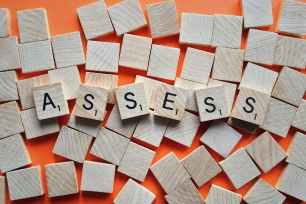 For some referrals, therefore,  this is my tool of choice and the quickest way to ensure the child can access services because their condition is then officially recognised by teachers and the Local Authority. Thie example report is then how I report the results, ensuring I clarify the limitations of the tool, and that additional data and assessment has been undertaken to inform my clinical reasoning. 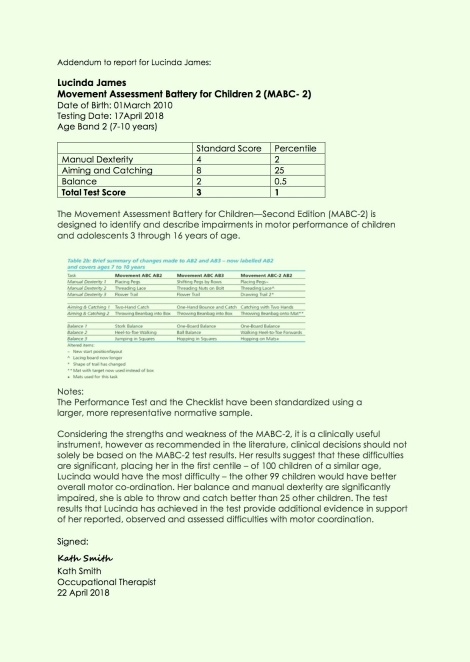 But when I use the term Dyspraxia, I am usually using it to refer to a pattern of praxis difficulties recognised in the research that we hypothesise interferes with participation in activities at home, school and out and about.

This pattern is typically identified by gathering a history of development and functional difficulties, Ayres’ Clinical Observations and the Sensory Integration and Praxis Test. I like the history form in Schaaf and Mailloux 2015 and the Sensory Processing Measure, or for adults the Adult/Adolescent Sensory History.

I will also use the COSA, OSA, SCOPE and MOHOST to gather information related to difficulties with participation in daily life and to set goals, and these can then also act as great subjective outcome measures. The impact of DCD/Dyspraxia on daily life is significant. Caçola 2016 described how Dyspraxia/DCD is considered to be “one of the major health problems among school-aged children worldwide, with unique consequences to physical and mental health.”

Poor praxis often means a person with little understanding of where their body is in relation to the world and so what to do next, making the plan and doing it becomes harder than for others. When this happens, our brain is unable to feel safe and secure, and so it is unlikely that the person can remain in a ‘calm and alert’ state.

For those who have poor praxis, a sudden increase in arousal often happens when a  new or unfamiliar task is presented, because the previous failures to achieve success on sensory-motor tasks will trigger and raise arousal levels. This often means the person’s body is on ‘red alert’  – reactive to the world and small confusing changes happening within their own body. This may mean they are more likely to make decisions in flight, fight or freeze mode, resulting in behaviours that challenge others. The underlying problem is the praxis deficit not sensory reactivity in response to a perceived threat. This is why thorough assessment is required.

Arousal and alertness, sensory modulation and praxis are interwoven with a complexity that is often missed by others and those new to learning about sensory integration theory and practice. Praxis difficulties that result in behaviours that challenge others are often labelled as sensory modulation difficulties, however digging deeper will often reveal praxis deficits underpin the dysregulated behaviours and attempts to get control. This is very true of our clients who have dyspraxia co-occurring with mental health difficulties. We ignore and disregard praxis at our peril. Left unaddressed, praxis deficits continue to interfere with participation in daily life, skill development and self-esteem unabated.

Watch this young person’s story about living with dyspraxia.

How is a diagnosis made?

For a diagnosis of DCD to be made, your child usually needs to meet all of the following criteria, in some areas of the UK this requires a score below a cut off on the Movement ABC-2 Test.

Usually, DCD is only diagnosed in children with a general learning disability if their physical coordination is significantly more impaired than their mental ability.

What about DCD/Dyspraxia and Autism?

In numerous studies, the links between autism and praxis skills have been reported.

In 2016 Cassidy published important findings from a study, showing that

These results suggest that motor coordination skills are important for effective social skills and empathy. This is clearly seen in children and young people presenting in clinics who struggle to know how to make friends, ask for the help they need and can’t understand others feelings and frustration.

What about DCD/Dyspraxia and Speech and Language Difficulties?

In 2012 Stout and Chaminade stated that “long-standing speculations and more recent hypotheses propose a variety of possible evolutionary connections between language, gesture and tool use. These arguments have received important new support from neuroscientific research on praxis, observational action understanding and vocal language demonstrating substantial functional/anatomical overlap between these behaviours.”

Listen to this Speech and Language therapist describe the links between speech and language concerns and tone, more general praxis and motor coordination difficulties.